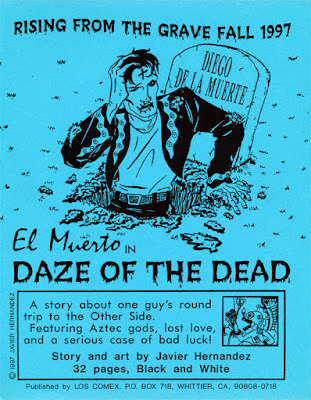 DAY 2: You know what I remember most about drawing that first issue of El Muerto? The long time it took to finish it. Based on the ad on the left, I originally planned to publish the book in the Fall of 1997, but ended up publishing it in February of 1998. At the time I was working in a retail store, and also part-time as a production artist. So the days were few and far between that I would have the time to focus just on drawing pages. That drawing I did for the flyer always reminded me of that cartoon where Bugs Bunny pops out of the ground thinking he made a wrong turn in Alburquerque!

Often there were weeks in between getting back to a particular page. It was the first comic I ever attempted, other than the ones I made as a young kid. But like I've always done, I drew the entire story out in a rough draft, then redrew it on the larger sheets of Bristol paper. But the desire to get it done was there, I was just lacking the discipline and available time to dedicate all my efforts to it.

El Muerto was actually originally meant to be part of a group, a Mexican Avengers, so to speak. As early as 1993 I was doodling ideas for the group. From what I remember one was a masked luchador, one was an Aztec star god of some type, and one was this undead mariachi-looking guy. Eventually I started to focus on the dead guy, as he seemed the one to have the most story potential. Here are some of the earliest drawings I did of El Muerto, and one of the god Tezcatlipoca: 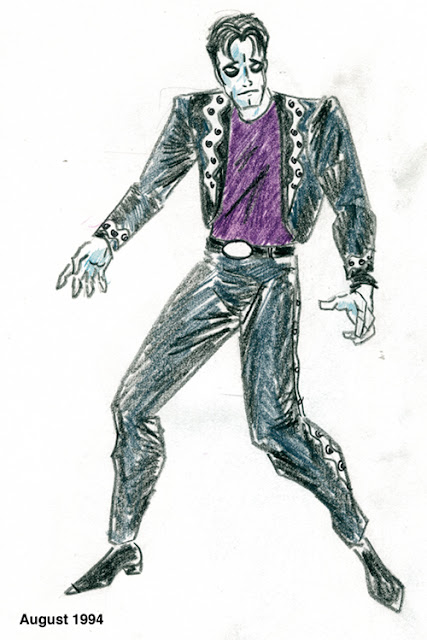 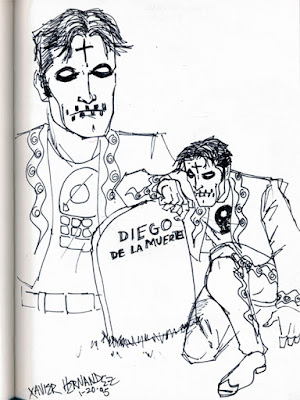 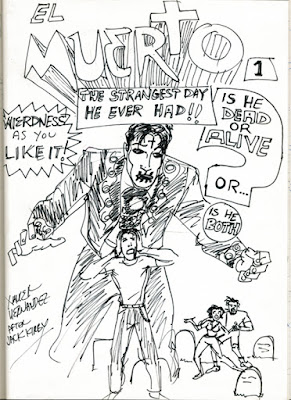 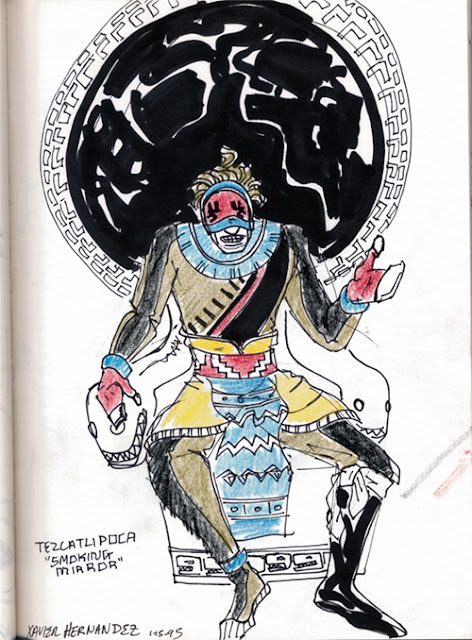 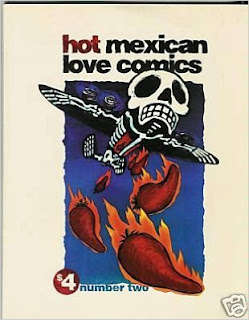 Eventually though I got to the point of finishing the story. Historical fact: At some point in the middle of production, I was invited to contribute to an anthology called HOT MEXICAN LOVE COMICS (1997). I was allotted 3 pages, and since I was working on the Muerto origin story for my own release, I decided to create a new character for the MEXICAN LOVE comic. So that book is actually my first printed comics work. And that's how Weapon Tex-Mex was born. But since this series of blog posts isn't about him.... (But don't worry, you can read that comic here). 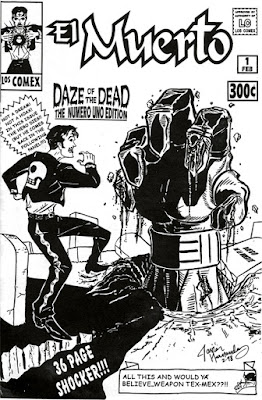 And so EL MUERTO: DAZE OF THE DEAD- THE NUMERO UNO EDITION was published in February of 1998. It may not be the longest title ever for a comic, but it's got to be pretty darn close! I timed the release of my book so I could debut it at the Alternative Press Expo (San Jose, CA). Interestingly, two years earlier, in 1995, my friend Rafael Navarro and I traveled to APE to check out the indy comics scene firsthand. Rafael was getting ready to launch his own comic called SONAMBULO, featuring a former masked Mexican wrestler turned Private Eye. I had read that Carlos Saldaña, a cartoonist from Los Angeles, was going to be at APE and suggested to Rafael that it would be cool to meet folks like him. Carlos was doing a funny animal book called BURRITO, about a time-traveling donkey, so it made sense for us to network with a fellow Mexican-American cartoonist doing his own culturally-inspired books. Carlos was affable and generous with his knowledge. He definitely encouraged us to go for it, but also warned us about the hard work it took to survive in the indy comics scene. We figured we were ready. What the heck, right?

So two years later I debuted my book at that same show. I did an initial print run of 300 copies. A 32 page book, photocopied and stapled at a since-closed Copy Max. To save costs, the whole book was in b&w, even the covers. Picking up that large box of comics was like receiving a first child at the maternity ward in the hospital. Special! 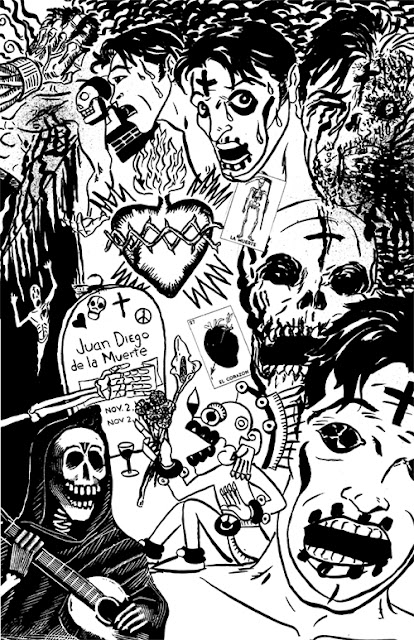 As a way to hype up the debut of the comic I created some bumper stickers (an advantage of working at the screenprinting shop at the time). I don't remember if I sold them separately or included them with every purchase of the book (or probably both!), but folks liked them and it made me feel like I had my merchandising down like a pro. 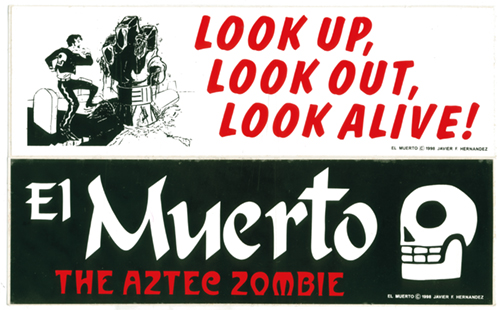 Another product I created was a newsletter called THE BORDER. This was given away free to everyone who bought a comic, or if I thought they might be interested. I modeled it on the WEEKLY WORLD NEWS tabloid, and also on the old Marvel Bullpen page, the in-house editorial page they used to have in the comics hyping up the publishers latest news and products. THE BORDER: Tomorrow's News....Right Now!! 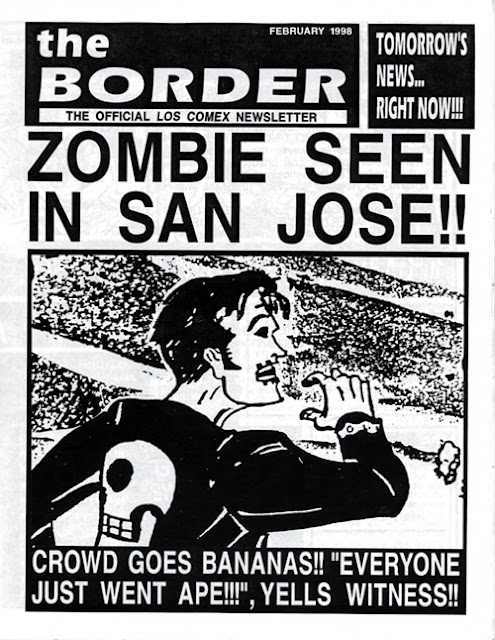 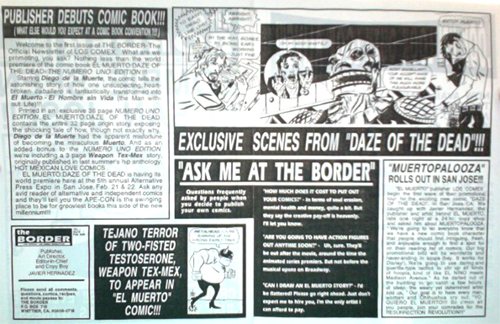 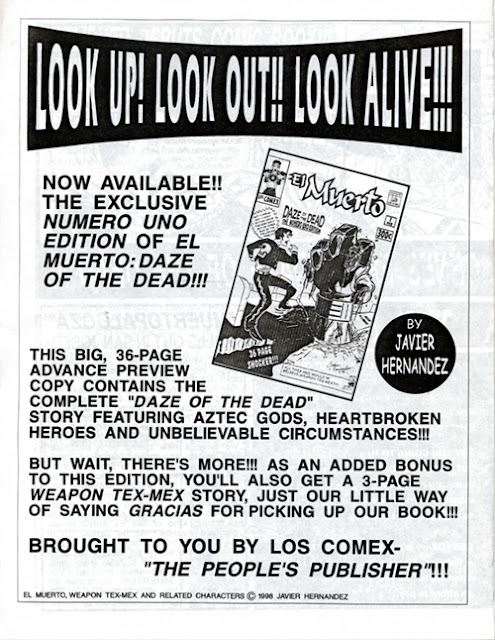 Diego de la Muerte... Killed in a car crash, awoken in the Land of the Dead. A chess piece in the hands of two gods, both at odds with one another. Sacrificed, resurrected and sent back to Earth. To do the bidding of a god...but which one?

As intriguing as that premise sounds, the journey I eventually found myself on here in the real world proved to be twice as fantastic. That first show I now look back on as a hazy dream... I remember setting the table up, stacking up the comics and newletter, arranging my signing and merchandise for the best presentation. Then, the doors open and the fans start trickling in. Eventually people made their way to my table and after engaging in some chit chat, they either pick up the book or not. And that's the way it goes for everyone, newbie or seasoned pro. But being a first-time publisher, you have no reference point to relate the experience to. You just engage the audience, conduct a sale or not, then just address the next person at the table. You could say you're competing against all the other tables for readers, but really you're putting yourself and your work out there and rolling with the journey.

You might sell lots of books, or engage in really interesting conversations with the attendees, or you might have no traction with the crowds. Either way, the conventions are only one aspect of the whole process. The creation, the sitting at the table late nights drawing a new story, creating a new world, that never changes. It's always exciting and adventurous and satisfying. Come to think of it, so can a convention appearance, regardless of the commercial aspect! 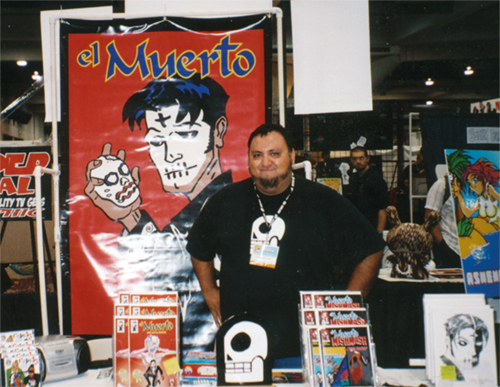 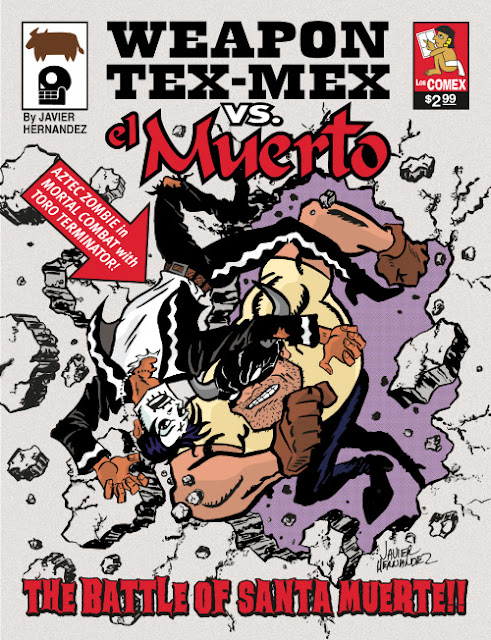