Sorry for the long delay, but here's Part 2 in my series chronicling the behind-the-scenes process of my upcoming comic book, WEAPON TEX-MEX Vs. EL MUERTO: THE BATTLE OF SANTA MUERTE!! 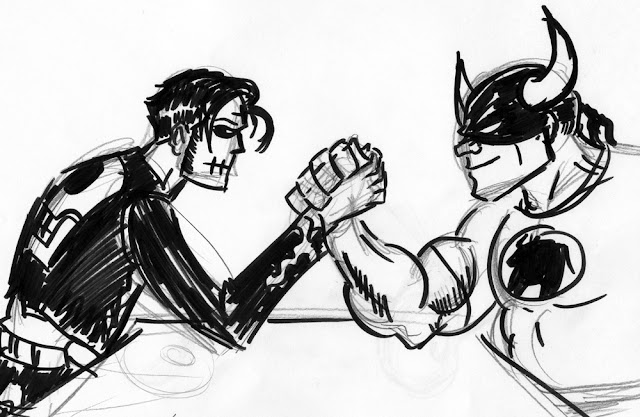 (A sketch for an upcoming promotional piece of art)

The reason I haven't been posting for the last 3 weeks was that I've actually been busy drawing the actual comic book. As of today, I can say I've penciled and inked the entire story. Of course, I need to go back and finish details on most of the pages, a few panels here and there. The way I worked was to sweep through the 18 pages, making sure all the figures were inked, and most of the backgrounds. What I need to go back and finish are mostly drawings of cars and interiors of buildings. As those will take a little more time (such as the perspective involved with some of the shots) I didn't want to 'slow' down my inking pace.


In the first part of this series (scroll down this blog or click here to read it) I talked about what inspired me to create a Tex-Mex Versus Muerto story. Here I'm going to talk about how I put the story together. 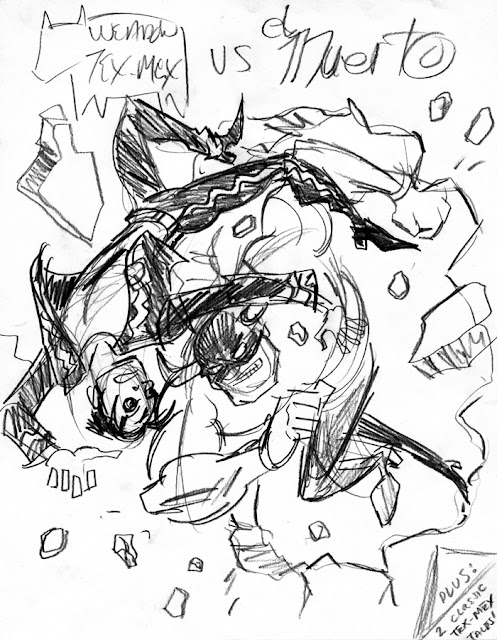 Once I came up with the idea of having my two characters duke it out in a comic book, the first thing I did was come up with a sketch, something I thought could be used as a cover. Well, the second I finished the sketch, I knew without a shadow of a doubt that this had to be the final cover. There was something about the outrageousness and sheer audacity of the image that made me both laugh out loud and tingle with that excitement you sometimes get as an artist when you've 'stumbled' across a gold nugget in your own mind. Often in these type of superhero crossover battles (again, see the images from the previous blog post) there's a strong desire, at least for the cover image, to make sure each hero has equal standing with the other, where one character isn't getting the upper-hand on the other.

Well, these are both my characters, so I didn't have to worry about offending anyone. And since Tex-Mex is a rip-snorting, hulking brute of a man, why the heck wouldn't he be plowing the 5' 10", 160 lb El Muerto through a concrete wall?! Plus I like the fact that even though El Muerto is my signature character, with much wider recognition (the dude's got a movie made about him, for cripes sake!), he's on the receiving end of a good ol' Texan butt-whippin'!


This isn't actually the first time Muerto and Tex-Mex have been seen on the same cover. That milestone happened on my last book, COMIC POP, (with me thrown on there to further increase sales) : 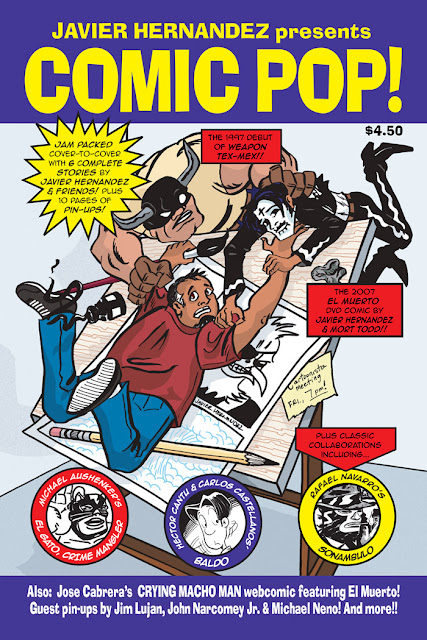 They didn't actually appear in a story together, that comic was a collection of reprints featuring individual stories with them as well as some other rarities. But the idea putting them together really appealed to me.
My plan for the Versus story was that I wanted to make it a short story, primarily for the fact that the two previous Weapon Tex-Mex comics were short tales, really short. The first was 3 pages, the second a whopping 4. Since this is technically a Tex-Mex story, I wanted to keep to the shortened story format. Originally I thought I could do this story in about 8-10 pages. Eventually it clocked in at 18 pages, but it's the only way to have told the particular tale I came up with.
When I sat down to thumbnail the story, I didn't really have a definite idea where I was going, or at least how I was going to get there exactly. Just so you know, I don't actually write scripts for myself, I literally have to see the story in visual form, that's my 'script'. I prefer to deliver the story from my mind to the paper with the actual images of the story, unraveling the narrative through images, panel by panel, page by page. I knew the main story points I had to hit, but when I sketched out the first pages of thumbnails, it was almost like watching the story unfold right before my very eyes.
Here are the first three pages of my thumbnails (these are drawn on plain 8.5" x 11" sheets of white paper).  Page 1, first panel was going to have the title and credits, then followed by the first two panels, setting up the opening: 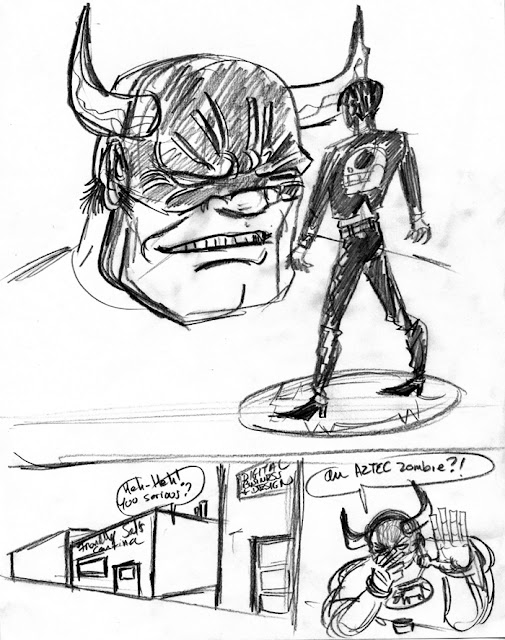 Page 2, a meeting between Tex-Mex and someone looking to hire a zombie hunter: 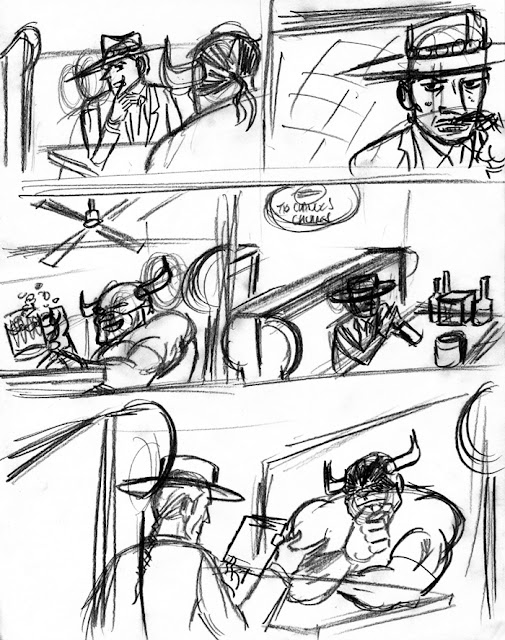 As you can see on Page 3, I stopped drawing when I got to the bottom of the page: 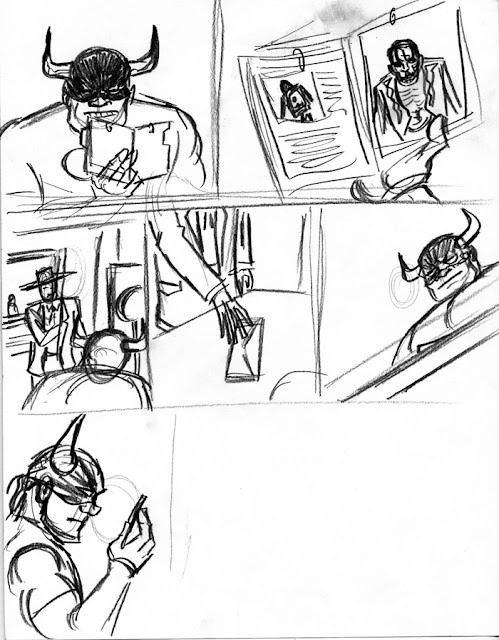 The reason I stopped was I realized that I was eating up 3 pages already, and I was hoping to tell this story in under 10 pages! So I knew right away I had to find a quicker way to start the story. I eventually got rid of the guy hiring Tex-Mex, or at least substituted another character for his role, and reworked the opening into a tighter narrative. So these pages go into the 'deleted scenes' folder...
Getting the tone of the story was something I always had to keep in mind as well. Tex-Mex is more of a satirical, humorous character, and his two previous stories reflect that, while El Muerto is much more along the lines of a tragic, cursed-hero figure. I don't want to give too much away here in regards to the final project, but I just crafted the story with the idea that these two have to meet in a story, and they have to be who they are, and the narrative has to tell their story. Obviously what they have in common is that I've drawn them before in their own stories, and even though they have their own distinct voices, I'm the one doing the 'talking'. So I think the way I confronted this issue was to simply just write them together in a story, keeping their unique identities intact, and make the story work.
Another reason I wanted to bring these two characters together was I plan to debut this comic at the inaugural Latino Comics Expo, being held in San Francisco at the Cartoon Art Museum on May 7 & 8.  It seemed like such a natural idea to have a comic featuring Weapon Tex-Mex and El Muerto at such an event. In fact, I'm also aiming to produce a special limited edition of the comic exclusively for this event, with an entirely different cover and some extra added bonus item. More on that later...
In my next post for this series, I'll share some of the actual inked pages and how I approached that stage of production.
Posted by Javier Hernandez at 9:31 PM

Great insights man.
Love the "deleted scene"! (and how Tex Mex has a run at the idea of Muerto!) lol

Looking forward to the book sir.

Ga-roovy! This should be quite a dust-up!

I always like to seeing your early sketches in comparison to the finished product Javier. Its interesting to see what gets left on the cutting room floor and what you decide to emphasize or tone down.

I know its a non-canonical storyline, but do you ever think you'd have a "real" crossover between your characters? Not so much creating an expanded universe in terms of Marvel/DC proportions of course...just including a crossover that would move along naturally with the story.

Thanks for your comments, everyone.

Jack: Believe it or not, this story is 'canonical'. In other words, this is something that really happens to Diego de La Muerte/El Muerto. I don't want to make any of those statements you get from Marvel/DC ( "Nothing will ever be the same again!!"), but I am creating this so El Muerto is true to his character/storyline, same for Tex-Mex.

Read the issue and let me know what you feel.