My 6th and newest Poster Comic is available for viewing...THE BATICALACA! 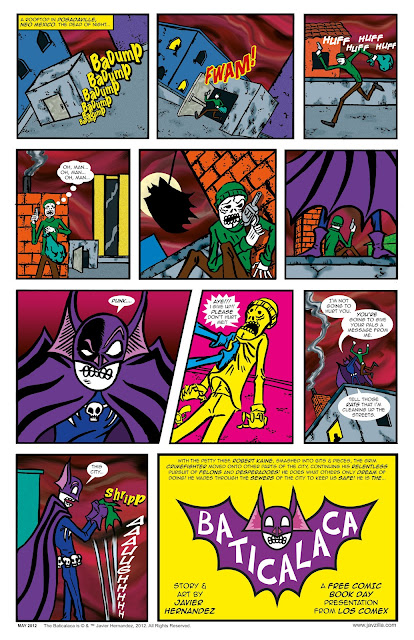 (Click on the image to see a larger, readable version on my page at DeviantArt.)


The Baticalaca is one of the heroes of the CALACAS OF JUSTICE, my Day of the Dead-themed super hero group. A previous Poster Comic featured another hero from the group,  The Spider-Calaca.


This Poster Comic will be available for FREE this coming Saturday, May 5, at the LATINO COMICS EXPO, while supplies last. I'll be exhibiting both days at the Expo, being held again this year at the Cartoon Art Museum in San Francisco. Free Comic Book Day is a national event with participating comic book stores giving away free comic books created exclusively for the event. I wanted to have a free giveaway as well and figured the brand-new BATICALACA Poster Comic would be a great way to do it!

Posted by Javier Hernandez at 9:01 PM No comments: 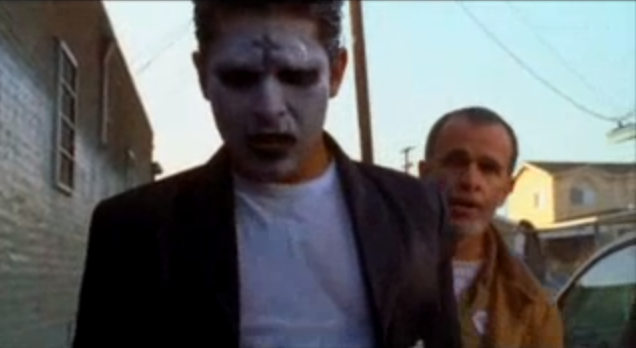 I did an interview for the COMIC BOOK CINEMA site, a blog that spotlights films based on comics and graphic novels.

It's been awhile since I've done an interview about the EL MUERTO film, as it came out in 2007, but occasionally someone will ask about it. It's always nice to go back, with several years perspective on it, and relive some of the memories.

When I was first contacted about the possibility of making a movie out of the comic, in August 2001, believe it or not, I figured it was interesting to have gotten the attention of a filmmaker. At the time, the X-MEN film had been released, the BLADE series was in full swing, and SPIDER-MAN was just around the corner. Over the next couple of years comic book movies became the hottest thing for Hollywood studios, and it was with the rising tide of these large blockbusters coming out that somehow, to me, seemed like a movie based on my black & white, self-published comic was going to get made.

I was probably more optimistic about the chances of the EL MUERTO film actually happening because of our circumstances. Screenwriter/director Brian Cox, the person who initially contacted me, wanted to make the film. Larry Rattner, the producer that Brian partnered with, wanted to make the film. A group of businessmen, the Leones, Bruno and his two sons Dan and Rich, had previously approached Larry with a desire to finance their first film production. Larry brought up the idea of an EL MUERTO movie to them, and, like producers do, convinced them to put their money into the adaptation.

By 2005, we were in the midst of filming the movie. It was about a four week shoot, and every day was filled with surreal moments. For me, it was like years of film school compressed into 30 days of non-stop work, action and drama, with my comic being chosen as the class project! 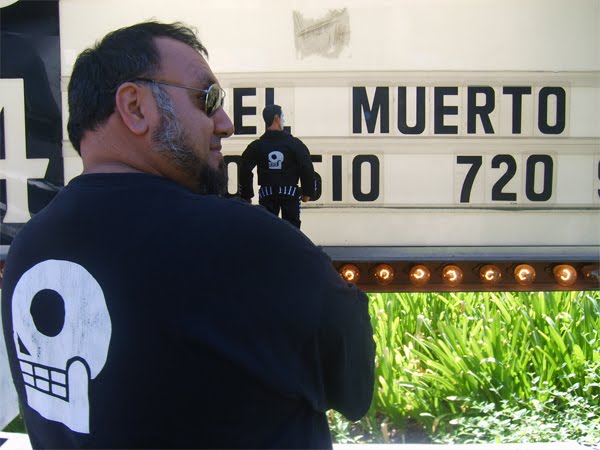 At the Laemmle Grand Theatre in downtown Los Angeles in 2007, with mini-Muerto.

In the years following it's completion, film festival run, DVD release and cable TV circulation, the movie continues to find it's life beyond it's celluloid confines. I'll meet fans, via the internet or at conventions, who've seen the film in one form or another. A couple of years ago on this blog I wrote about what I called 'the Muerto movie boomerang effect', sharing some examples of how the film continues to find fans.

That's the power and reach of film, even a relatively small production like our independent comic book movie.

Check out the interview at the COMIC BOOK CINEMA site. And thanks to Ron Evans for contacting me for the chance to talk about a little film called EL MUERTO!
Posted by Javier Hernandez at 5:58 PM No comments: 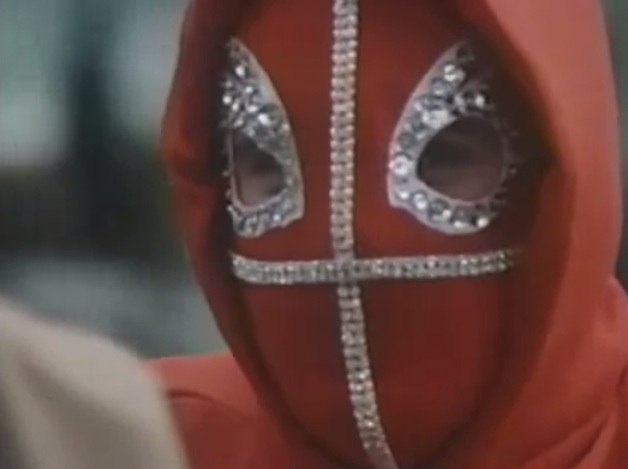 Looks like someone is making a documentary on THE HUMAN FLY!


Long-time readers of this blog know that the Human Fly is the 1970s real-life masked stuntman whose exploits were made legendary in the 19-issue Marvel Comics series. I have written about the comic book (and my passion for it) here before, which you can find at this link. 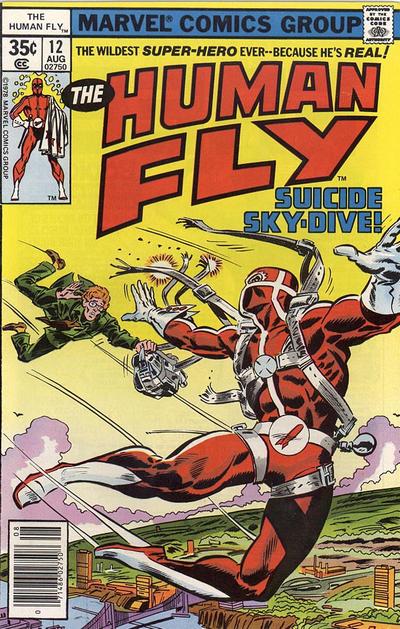 The YouTube clip above is an intro to the film, which hopefully will be completed and released. Despite all my years of being a fan of the Fly, I had never seen any video footage of him, so I was literally beaming with excitement when I finally watched the promo film. Imagine waiting some 35 years to actually watch a childhood hero of yours in action? For me, the Fly from the comic series (which was written for it's entire run by one of my favorite writers, Bill Mantlo) is the real Human Fly. He's the one whose story I followed for a year and a half as an 11 yr old, all wide-eyed and star struck. The fact that I knew the comic was based on the real-life stuntman just made him all the more awesome in my mind. 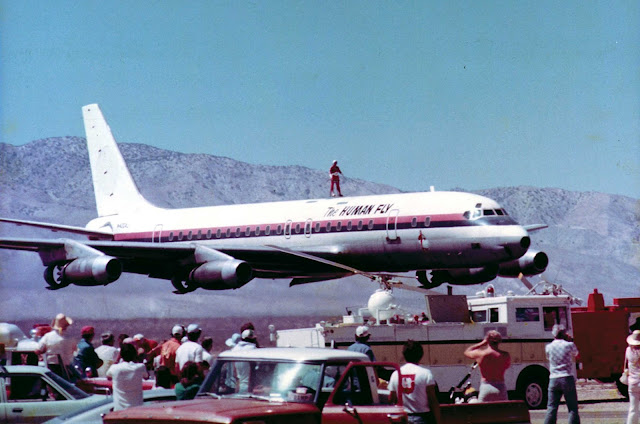 While all my friends were tripping over themselves to get to the new STAR WARS movie, I was daydreaming about the wildest superhero ever, because, hello, he was real!

My good friend Michael Aushenker (fellow cartoonist & Fly enthusiast) wrote an article a few years ago for BACK ISSUE magazine, (you can read my review of it here) providing the most comprehensive history in print I've ever read on the backstory of the Human Fly. It's worth seeking out (and not just because he actually got a quote from me for the piece!). While there are some unanswered questions and rumors regarding the Human Fly, and I imagine the documentary will address (expose?) them, I'll always have my idealized version of the Fly, as illustrated by such master cartoonists as Frank Springer, Carmine Infantino and the untouchable Mr. Frank Robbins, with captivating scripts by the great Bill Mantlo. 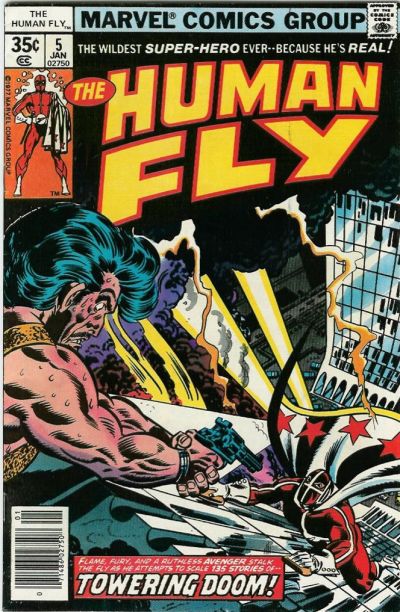 I'm eager to see the full story of the Human Fly, warts and all. It's about dang time, and I know there is an underground cult of Fly Fans just waiting for this flick. It won't be the super blockbuster movie that THE AMAZING SPIDER-MAN or THE AVENGERS will be, but what the heck, those characters ain't real! 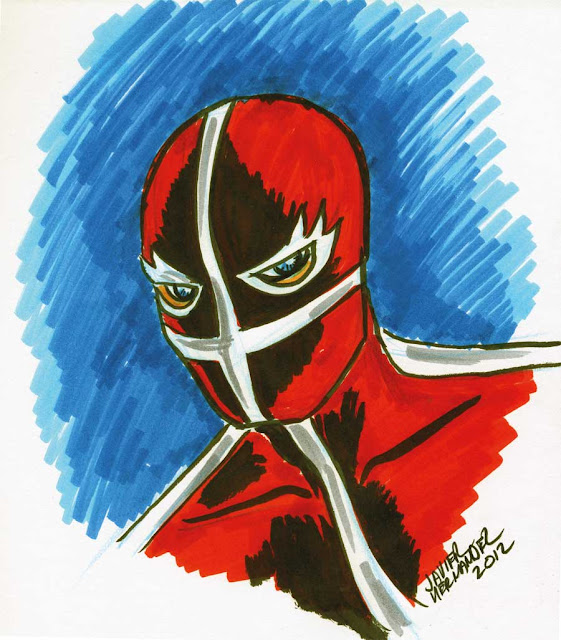 A color marker sketch I did just before writing this post, and after watching the video for about the 5th time since last night...
Posted by Javier Hernandez at 9:06 PM 2 comments:

April's Poster Comic is here...straight from the Limbos Galaxy! 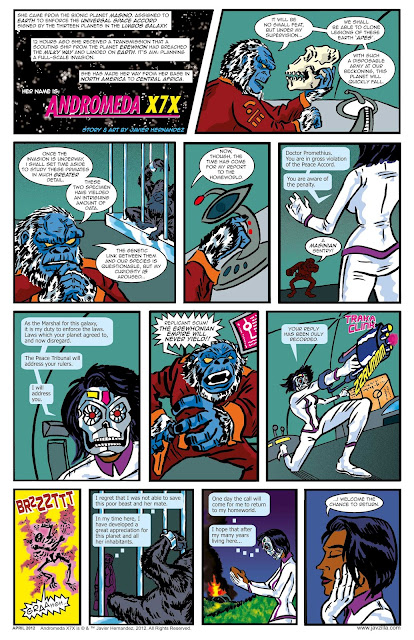 For a much larger version of the comic, click here, which will take you to my page at DeviantArt. Then click on the image and it'll enlarge to a much easier-to-read super-size.
Posted by Javier Hernandez at 7:40 AM No comments: