This coming Memorial Day Weekend, I'll be exhibiting at the Phoenix Comic Con. It's my first-ever show in Arizona, and as I've heard good things about this Con from some DIY comics creator friends of mine, I thought I'd take the plunge and head to Phoenix.

It's always exciting to get in front of a new audience, and I'll also be able to meet some friends of mine from Tuscon, the tag-team comic duo of Dave Baker and Eric M. Esquivel of Modern Mythology Press. Besides bringing along my comics and DVD, I'll also have some prints and original art with me. And, as a special exclusive to Arizona, I have a brand-new mini-comic I've just put together, WANTED: WEAPON TEX-MEX! 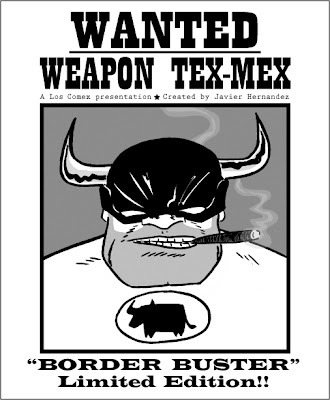 Weapon Tex-Mex actually appeared in the first comic story I ever had published. I was asked to contribute to an anthology called HOT MEXICAN LOVE COMICS, so I came up with this character to use in an anti-anti-immigration story, back in 1997. Seeing how the political climate is swirling around a new immigration firestorm from Arizona, I thought it would be most appropriate to reprint my original story, along with a new Weapon Tex-Mex story, and take it to the Phoenix Con. Actually it's the first new Tex-Mex comic in 13 years, so this is an interesting little collection. You get the first as well as the most recent story in the character's history.


I'll be at Phoenix Comic from Friday, May 28 - Sunday, May 30 at table T78. Los Comex is hitting Phoenix, baby! Planting the El Muerto flag in a new state, and ready to make some new fans.
Posted by Javier Hernandez at 8:04 PM 1 comment:

Yesterday was Super Saturday for me. I participated in a Free Comic Book Day event, and attended the Opening Reception of GEEKS Comics 'Covered' group show. A full 12 hours of comics and art, and every minute was a fun time.

My day actually started out at about 9:30am, when I hit the freeways toward Rancho Cucamonga, a good 35 minutes from home. Traffic was pretty non-existent and the weather was crystal clear. As I approached the shop, I was taken back by the sheer majesty of the San Bernardino Mountains. Now that's some serious Art! 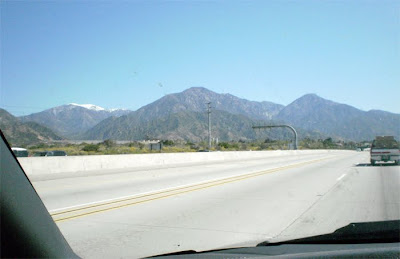 The FCBD event I went to was hosted by 4 COLOR FANTASIES, run by Chris Brady. My good friend John Narcomey Jr. split his table with me, and as usual with any time I exhibit, it's always best to have someone you actually like sitting in the trenches with you. John's a writer/artist, and the Creative Director of Hightower Comics. He's got a great outgoing persona, and I love talking comics craft, business and superhero movies with 'im. I actually recently did a pin-up for John's  GHOSTFACE #3. FYI: You can order the new GHOSTFACE tpb via Indy Planet! 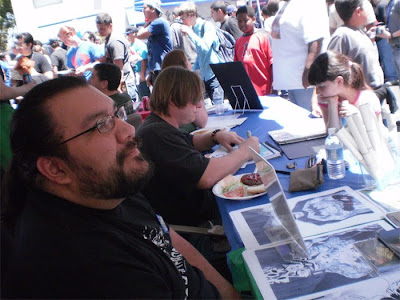 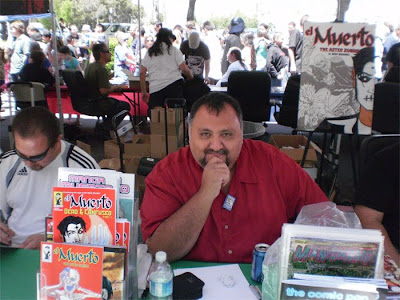 Chris had told me he puts on a pretty big show for FCBD, but Jeez Louise, it was mind-boggling to actually be in the eye of the storm! Here's a shot I took from a stairwell across the driveway: 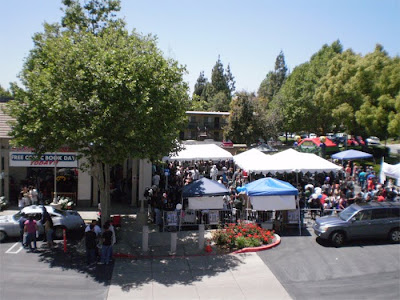 I swear, the event started at 11am, and by about 3 pm, there were still people in line to get free comics. Tons of kids and families and the usual comic fans. I got to meet lots of new readers, and even got commissioned for an interesting idea: 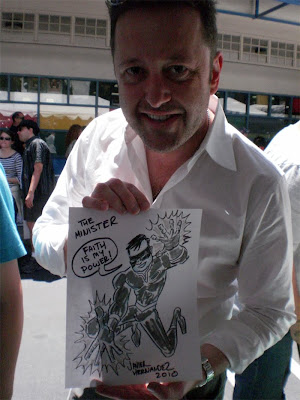 This gentleman asked if I could create a drawing for his friend, whose a minister. He showed me a pic of his friend via a Blackberry, and I went ahead and made this sketch. The guy was really happy with it, and was looking forward to give it to his friend. I had fun doing this. 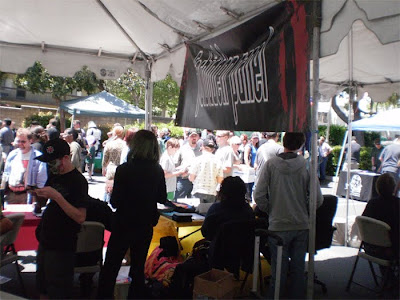 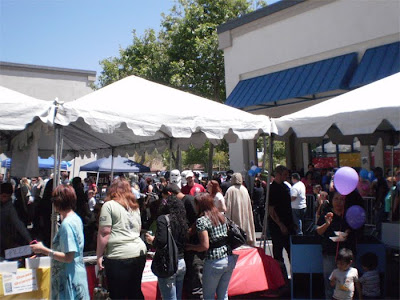 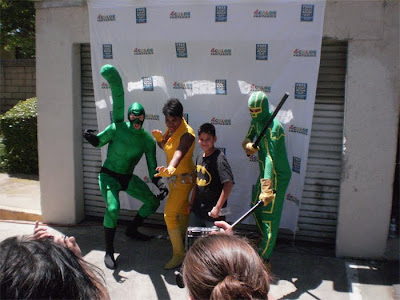 The Scorpion (Spider-Man villian), Vixen of the Justice League and Kick-Ass, with a young comic fan. There were several costumed characters throughout the day posing with fans for photos in this area.

Chris Brady, and his army of volunteers deserve a huge amount of gratitude and recognition for putting on such a stellar event. I can imagine the logistics, and cost, to have put on this event. Those 'free' comics aren't free to the retailers, and with about 20 creators showing up, plus all his other vendors and participants, Chris really had his hands full. But he does this because he loves comics, he's a totally professional retailer, and he's always trying to connect the community with this wonderful artform.

After we packed up all our gear, John and I drove over to Whittier, as we had an art show to attend to! After a relaxing break at Brickhouse Pizza (quickly becoming a standard if you're a local comics creator), we waltzed over to GEEKS and met our fellow artists.

Here's a group of us having a grand ol' time: 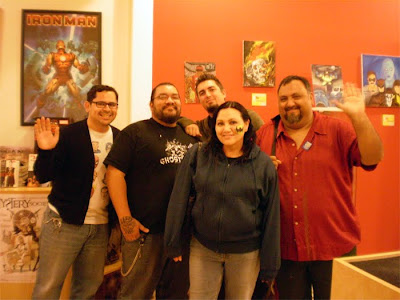 Left to Right: Gerry Bonilla, John Narcomey, Dan Mendoza, Grasiela Rodriguez (she picked up her Batsymbol at the face-painting booth at 4 Color Fantasies) and me.


Cartooning dynamo Raul Aguirre, the host of the lively and entertaining MAN VS. ART podcast, showed up with his contribution to Free Comic Book Day, a 'Citizen Sanchez' mini comic. And he was handing out free copies to one and all! 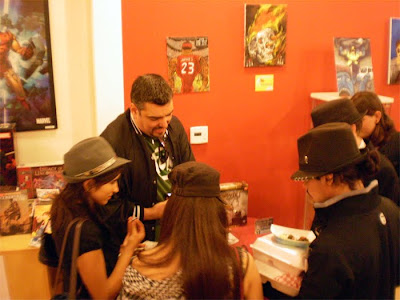 His comic's based on his animation project, which you can see right here:

And Raul's wife Hortencia also showed up with some art of her own: 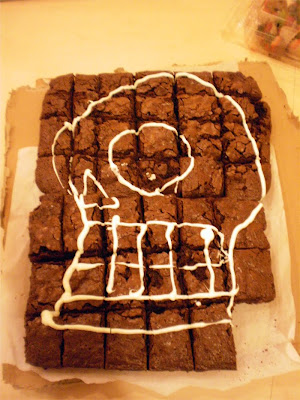 Yep, a heavenly delicious Brownie cake, with the El Muerto logo emblazoned on it. It was a belated birthday gift, and it was a very nice gesture. Class acts, Señor and Señorita Aguirre! Many thanks!


I unfortunately didn't take more photos of the artwork on display, but the show will be up for a few weeks. I'll post some pics later. Here's one of a kid clutching a copy of the kid friendly MANGA MUERTO! His parents asked about my work, and I directed them to this particular book.

It was nice chatting with some of the patrons, and with my fellow artists. By the time I left GEEKS, it was about 11pm, some 12 hours after the FCBD event began at 4 Color Fantasies. Not a bad way to spend a full day.  And topping it off with some homemade Brownies, well, c'mon now!
Posted by Javier Hernandez at 6:05 PM No comments: