Okay, so here's a whole new character, this time going way, way back to the past.... 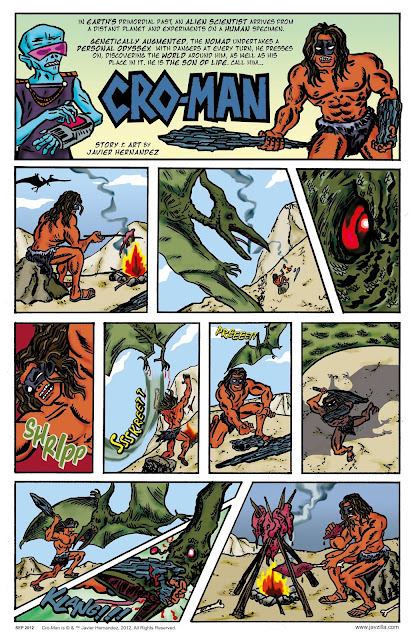 To see a much larger, readable version, please visit my page at DeviantArt by clicking here. Once the page opens, click on the image and it will enlarge considerably!

There's actually a whole genre of caveman superheroes, believe it or not. In comics we've had Tor, Anthro and Tragg, to name a few. In cartoons, there's been the Mighty Mightor and Captain Caveman. And in film, probably the most famous example is the notorious 80s flick, YOR, THE HUNTER FROM THE FUTURE.

So I had wanted to try my own hand at a pre-historic adventure character, and came up with Cro-Man. I can tell you that you'll be seeing Cro-Man in his own full-length comic book in early 2013, so enjoy the Poster Comic and the promo image below. The Age of Cro-Man is upon us! 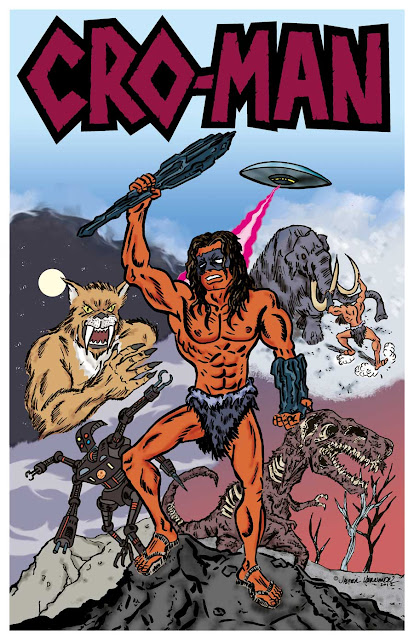 Posted by Javier Hernandez at 2:29 PM

TOTALLY diggin' Cro-Man, Jav!! Really like the "hide" mask he's wearing. Gotta protect his secret identity from the Hill Tribe!!
I've always had a soft spot for caveman and dinosaur movies, cartoons, and comics. I had a flashback to "One Million Years BC" when I read this- then with all the alien stuff in it, I was taken back to "Tragg and The Sky Gods". You've really hit on something with this and Dead Dinosaurio. Like the direction
you're going with these a LOT! I'm even hearing the Mighty Mightor soundtrack in my head when I read this.
Drive on, my brother!
Steven

Okay, this has to Steve Butler! (Unless Ditko has taken to calling folks 'my brother'!!).

Man, the fact you identified it as a 'hide' mask tells me YOU are in the caveman superhero inner circle! Sure as darn tootin' weren't no fabric shops in the Stone Age!

Fell in love with TRAGG and the rest of the Don Glut/Jesse Santos earlier this year. Such brilliant idea that Tragg. There's also an 80s caveman film that looks gonzo nuts called 'Yor'!! Look on Youtube for the trailer....

Thanks for your words of encouragement, they've always meant a lot to me, Steven.